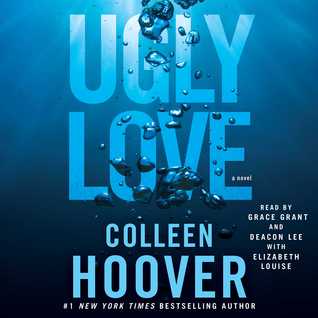 Ugly Love by Colleen Hoover
My rating: 3 of 5 stars

Although it’s a good emotional and rough story, well written, after 50% of the book, I’m afraid I didn’t like the most mercurial important character in the book. Yes I had hope it would be ok, but…

I don’t understand him, so selfish!

You know, you’re not alone Miles! Some people actually lost more than one love by accident or else and they moved on without leaving a wreck behind. Can’t think of one good thing about Miles. He was smarter when he was 18… A man this big and so self center. I understand he’s hurt but exaggerating words and silent, silence but deafening… duh

You’re smart enough to know, your friends worry about you but you can’t care less about them.

Ian was so good to you, even Corbin was taking care of you and most of all, Tate! How could you torture her so and not Rachel, who left you?
Are you aware they had feelings too and maybe they were hurt like you, before they met you?

Loved Cap! What an amazing and wise old man! And I got to say that Tate saved a man who doesn’t deserved to be saved at that moment.

All through the book, too much information about the “six years earlier” and I wasn’t impressed. I wanted to know more about the present and the development and interaction between Miles and Tate.

I wanted more about the realization of Miles almost throwing his whole life away! His story was tragic, ok! But there’s no hope, so why live and let others feel pain?

If you loved Maybe Someday, this isn’t enough and doesn’t come close.

I felt the ugliness not in the story, but in the character…

View all my reviews