If you know me, you know I love Sylvain Reynard’s writing.

Fan girl! Before I start rambling… Read my recommendations!

SR newest book, “The Shadow,” which is the third volume in my Florentine Series, has just been released. The final book in the series, “The Roman,” will be released December 6th and it is already available for preorder. The second book, “The Raven,” was nominated by RT Magazine as Best Paranormal Romance Suspense novel of 2015. Recently, Huffington Post Books ranked “Gabriel’s Inferno” as the best teacher/student romance novel.

SR’s interested in the way literature can help explore aspects of the human condition – particularly suffering, sex, love, faith, and redemption. SR’s favourite stories are those in which a character takes a journey, either a physical journey to a new and exciting place, or a personal journey in which he or she learns something about himself/herself. Also interested in how aesthetic elements such as art, architecture, food, drink, and music can be used to tell a story or to illuminate the traits of a particular character. Also tries to use the platform as an author to raise awareness about the following charities: Now I Lay Me Down to Sleep Foundation, WorldVision, Alex’s Lemonade Stand, and Covenant House.

To email SR,  use info@sylvainreynard.com

Gabriel’s Inferno Trilogy will get a post on its own, from me.

So now I’ll just share my thoughts about the Florentine Series and…We’re counting down until the December 6th!!!

Release of #TheRoman by Sylvain Reynard

If you’d like to hear a sample of the audiobook of #TheRoman,
you can do so here: https://highbridgeaudio.com/theroman.html 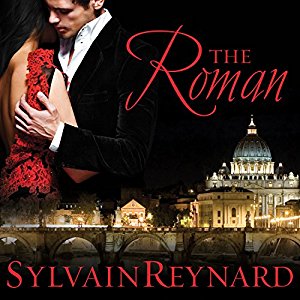 A closer look at the Florentines Series

The Prince by Sylvain Reynard
My rating: 5 of 5 stars

Re-read this time, English version
4,7* Past review:I welcomed the dark and all those stars in the sky,they look very appealing.

I read “The Raven” first and it did me no wrong 🙂 and let me tell you, I’m more curious now. I welcomed the dark and all those stars in the sky, they look very appealing.As well for the Professor. Is it me or Florence makes Gabriel naughtier? Loved all those dark characters and I, now, need to know more about Niccolo, Lorenzo, Ibarra and Aoibhe.

The Prince is a dangerous creature full of angst and shows no mercy, that inner battle worried me then and now, but would he change in the future? Ride on your Triumph and see your old friend. Hope as much as you need! The last battle, the physical one on the roof scared me. I know there is that hint of righteousness in him and I hope the sequel to “The Raven” will make him peace.

How could I forget Sylvain Reynard’s writing style, never! It’s tattooed in me.
This Novella like any other work of art that Sylvain writes was beautifully crafted.

Thank you Sylvain!
Don’t leave us hanging! I need the sequel…

The Raven (The Florentine #1)

The Raven by Sylvain Reynard

Added my review in the audio version earlier, now Paperback since I won the personalized one in a giveaway (Thank you), so it’s a re-read, though is the same review.
4,7*

I was transported to Florence.I miss it already and it left me very curious to continue investigating the entire city.I can see myself walking alone at night through those dark alleys, very mysterious places, indeed a magical world and in so many levels.

This story was painted beautifully, with such important details.

The author takes us on a tender and loving journey. I admire the fact that it wasn’t that supernatural intended… that’s the way I saw it. We all feel disabled in some way, at some point of our lives. Behind our everyday mask, we can also be very talented, but appreciated only by who can see us truly.

We learn to see behind the art of the painting, the story in it and how we interpret it. Restoring an old but beautiful piece of art can be hard, risky.
But there’s no other way to do it.

Thank you Sylvain for another wonderfully written and very imaginative story!

The Shadow (The Florentine #2)

The Shadow by Sylvain Reynard

I’m listening to the last chapters of The Shadow and I couldn’t
expect anything less than extraordinary from you!Congratulations!

(I already knew it was going to be awesome  )

Although I want to read it/listen to it again, it was so good to revisited all the characters. Dead ones and alive ones. Learning a lot about Florence and its dark corners, I have hope in the light and good people. I’m giving it another read, when my paperback comes.

I’ve been listening to my audible version, the last chapters are on loop… so I’ll do a more critical and hoping generous review! (:

My head hasn’t focus yet, I’m still fighting and rolling heads in a little alley in Florence…♥

I recommend The Florentine series, even if it is your first paranormal read, it will look like you are reading a romance thriller suspense mystery art and poetic story.

What are you waiting for? 🙂

Release of The Roman (The Florentine #3)

Raven and her sister, Cara, are at the mercy of a small detachment of Florentine vampyres, who are delivering them as a peace offering to the feared Curia in Rome.

Though she’s unsure William survived the coup that toppled his principality, Raven is determined to protect her sister at all costs, even if it means challenging Borek, the commander of the detachment.

In an effort to keep Raven from falling into the hands of his enemies, William puts himself at the mercy of the Roman, the dangerous and mysterious vampyre king of Italy. But the Roman is not what he expects …

Alliances and enmities will shift and merge as William struggles to save the woman he loves and his principality, without plunging the vampyre population into a world war.

This stunning conclusion to the Florentine series will take readers across Italy and beyond as the lovers fight to remain together. Forever.

Are you a fan of my books?

Why not join the #ArgyleEmpire and Professor Gabriel O. Emerson Fanpage fan FB groups? You’ll be the first to know about new work! There are TONS of Gabriel, Florentine and, well, ‘me’ 🙂 related groups, all of which are excellent and highly recommended!

One thought on “Author Sylvain Reynard”